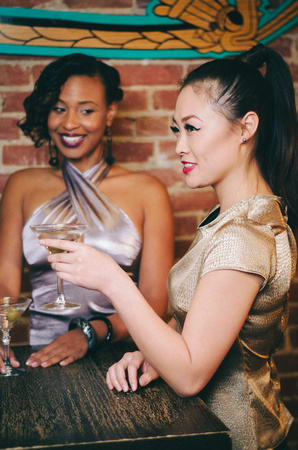 Hi everyone! When I worked in the corporate world, my company had a tradition called "Week of Rest" which was shutting the company down for the entire week between Christmas and New Year's Day. It was meant to be a time to spend with your family, take a short vacation and just recharge the soul batteries. Though I no longer work in the corporate world, it's a tradition that dies hard, so I've taken the greater part of the last week to just relax and stay away from my computer and yes, even my camera.

Before that, however, my life was packed with shoots. My good friend Miracle of Miracle Amor Artistry is jetting off to get married and honeymoon in the Philippines for two months, so we wanted to get as much work in as possible before she had to leave. In the span of two weeks, we packed in 5 shoots, two on one day. For a photographer, of course, this means a lot of post production work to be done, so I spent quite a while in front of my workstation, but the results were fantastic.

One of the shoots I am excited to share about is a fashion shoot we did with Mixx Collection, owned by Tonya, a great designer and collaborator. Tonya had a couple of pieces she wanted to photograph for the holidays so we started planning this shoot a couple months ago. Tonya had developed a good relationship with SomaR Bar, a bar in Oakland where she had put on fashion shows in the past. SomaR Bar has a great intimate feel with cozy furniture and exposed brick walls. I knew it was going to make a great location for what we wanted to do.

Tonya already had one great model in Jessica, who had modeled her work in fashion shows at SomaR Bar several times in the past. Miracle and I asked Kai, an up and coming model whom we both love, to join the collaboration.

We knew we would only have the bar for a couple hours while they were setting up for business, so our shoot schedule would be tight. I worked on shot ideas in my head the week before to make sure I covered the needs of Tonya, the models, Miracle and myself with regards to photographs. I knew I would need catalog style shots for Tonya, including closeups of certain details of her work. The models and I would need more fashion oriented shots that looked like they were torn from fashion rags like Vogue or Elle. And Miracle would need shots that showed the work she did on the makeup, perhaps augmented by the lighting style I wanted to use. 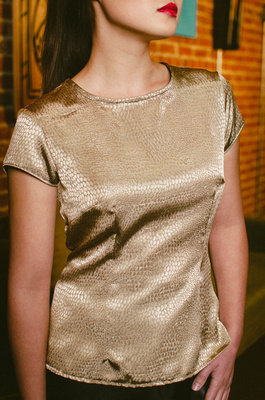 The lighting was the biggest challenge in this shoot. We ended up starting 20 minutes late, so what was already a tight schedule became even tighter. The bar was dark, as bars often are, so I set one of my flashes in the background with a warm gel to complement the red brick wall and give the atmosphere a warm, romantic look. You can see the effect of the background strobe in the detail image above. I set a second flash as a main light which I kept over my left or right shoulder as I shot, depending on the effect I was looking for. 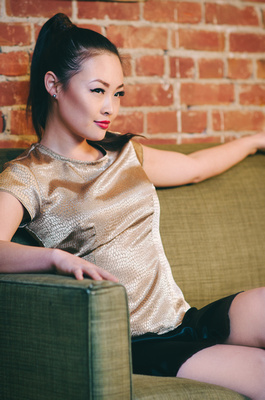 The goal I had with the models was keeping with the theme of "a night on the town". I envisioned two girlfriends going out after work in their gorgeous new outfits, enjoying all the attention they were getting and having a great time together. Though Jessica and Kai had never met before, they jumped right in to their new roles. I asked the girls to flirt with the invisible guys at the bar behind me. Though one of them admitted she didn't have much experience with flirting, they both did incredible jobs, apparent in the flirty look by Kai in the image above.

The most difficult shots, both for me and the models, were the shots with both of them together. I had to find ways to shoot them together in natural ways while showing off their outfits. My idea was to shoot them at a bar table with fake martinis in hand, talking, laughing and flirting with the guys (you know, the ones who weren't really there!). I shot them as individuals but kept the other model in shot so the viewer could see the interaction between them. One of these shots is the first shot in this article.

Tonya also wanted some full length shots against the wall, so we moved them to the wall. At first, it wasn't clear how these shots were going to work, but Kai threw her arm around Jessica, laughter ensued and the girls just started posing! We ended up getting some great shots once everything fell into place. The lesson I learned was don't give up on an idea right away, just keep going with it and see if it takes off. 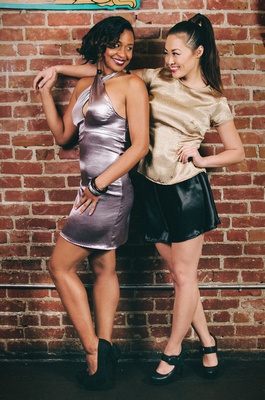 My post processing workflow involves Adobe Lightroom 4 and VSCO Film with detail work done in Adobe Photoshop CS6. VSCO Film saves me a ton of time in helping me get the quality of film from a digital image without too much tweaking.